Launch of She Never Looks Quite Back

It was a special event! The launch of She Never Looks Quite Back took place in front of a gaggle of authors, avid readers and friends at the Training Vision Institute, The Cathay. In Singapore, of course.

Singapore, 4 March 2022. Mallika’s debut short story anthology She Never Looks Quite Back was launched in Singapore on 27 January 2022 under the auspices of literary greats.

Dr. Kirpal Singh chaired and moderated the panel with his usual eloquence, demonstrating his deep knowledge of literature, having taught English Literature at the National University of Singapore (NUS) in the 1980s to 1990s, and thereafter at other institutions. It was rather special for Mallika as she had sat in his tutorial room in her first year of reading literature in 1988, remembering a man who spoke in a measured way, surrounded by piles of books on the floor and table that nearly eclipsed the sight of him! 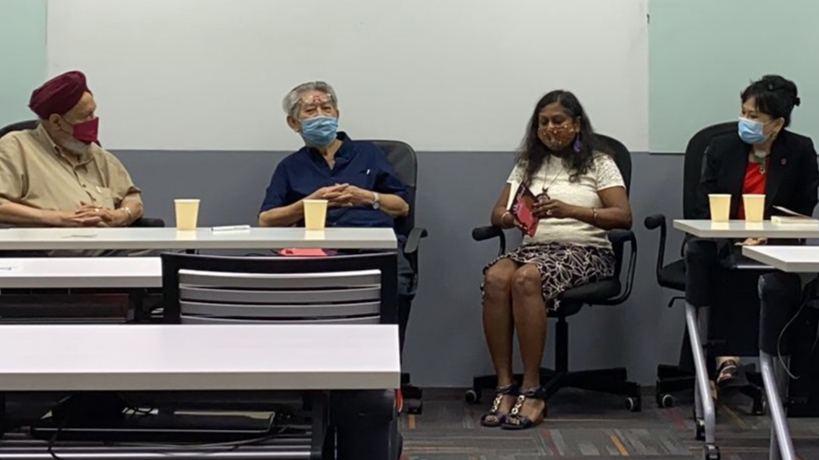 An engaging discussion at the book launch chaired and moderated by Dr. Kirpal Singh. The other panelists were Robert Yeo, Mallika Naguran and Prof. Lye Lin-Heng.

Who’d think that, fast forward decades later, Kirpal would be a key part of her book launch. All Mallika had to do was ask, and in just two weeks, Kirpal sprang into action to coordinate the launch venue at Training Vision Institute (where he works as a director) with no bills attached (thank you!). 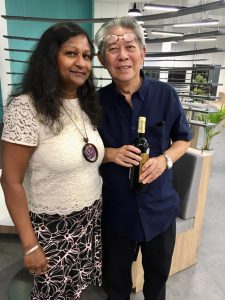 The other integral person was Robert Yeo (left), poet, playwright and one who has been a great support to Mallika since they had met at the Singapore Writers’ Festival in 2017. Robert also wrote the foreword in She Never Looks Quite Back, where he concluded: “I do not want to end on what seems a pessimistic note. Some of the stories are heart-lifting. As I write earlier there is variety to be found in this collection, one of the best I have read in recent years in the short-story field in Singapore fiction.”

Prof Lye Lin Heng taught Mallika at NUS’ MSc Environmental Management program from 2012 to 2013.  Lin Heng was the director of Asia-Pacific Centre for Environmental Law from 2013 to 2017. Mallika counted this subject as one of her favourites; besides it was fun to attend the lectures and watch in awe Lin Heng’s advocacy on shaping a better world (through law and enforcement of course). Over the years, Mallika built close friendship with this dynamo woman who continues to render her support in numerous ways, literary ventures included.

Mallika shared that her prime motivation for writing was to show the Truth. Her stories carry subtle messages of social justice and environmental conservation. For instance, she wrote ‘The Liquid Goalie’ based on a real person–Fatim Jawara, a Gambian national footballer, who joined the boat people in seeking refuge.  But Fatim’s journey in crossing the seas was not documented, which gave her room to imagine what could have happened. Metaphysics helped fill this gap. 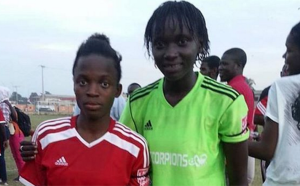 Fatim Jawara’s story (right) is fictionalised in The Liquid Goalie

“Using metaphysical concepts and conceits, the storytelling accentuated the strength and fragility of the human dimension,” she said, adding that that also created a certain transcendence “beyond what is perceptible to the senses.”

By instinct, she had resorted to use metaphysical elements to create startling visual images or comparisons in her stories, such as the fictionalised protagonist Sanji in ‘The Liquid Goalie’ encountering the most unusual marine mammals e.g. whales and dolphins, while staying afloat with no other human in sight.  When in her 20s, Mallika had read poems by metaphysical poets such as John Donne, George Herbert and Andrew Marvell, and realised that her writing has been coloured by such unusual technique.

The observation on literary techniques continued.   Robert described and read passages from the short stories where he reckoned italicised sentences delivered greater punch. He repeated what he’d written in the foreword: “Pay attention to the italics in prose.” Mallika shared that she needed to set off the inner voice to complement or contradict what is vocalised; the use of italics helps in this regard, demonstrating “the conflictual nature of a person.”

Then came the story-based discussions. Prof Lye described the social conflicts that are ever present in prominent environmental projects such as the Bakun dam in Sarawak, East Malaysia, describing real and unfortunate incidents that have occurred with activists. This makes the story ‘Bird Watching’ most relevant, as that story by Mallika concerns a real disaster that took place with a hydropower dam on the Bertam River in Cameron Highlands, West Malaysia.

She also said she also liked ‘Weep Me a River’ and ‘Five Cents’ a lot because it showed how young women struggled hard to change their destiny. Mallika could not agree more. The vibrations of feminism were felt and appreciated, overshadowing certain male-oriented expressions made at the session.  What a memorable book launch! 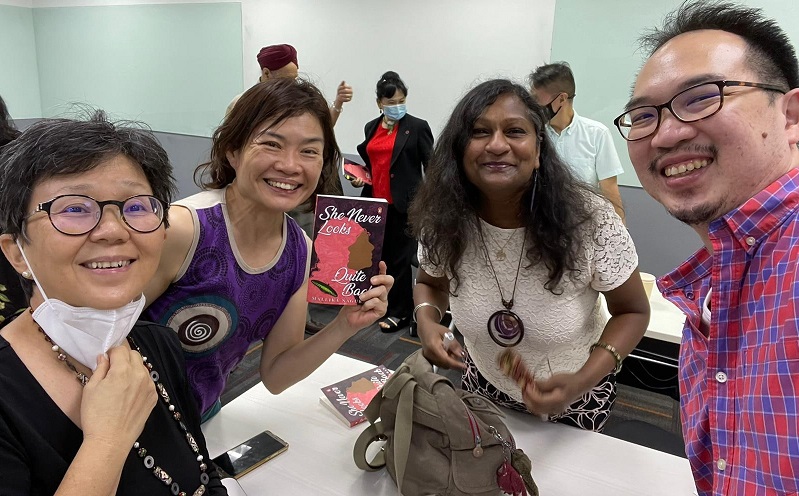 Nothing is sweeter than authors getting together for a good yak. From left, Audrey Chin, Vicky Chong, Mallika Naguran and Daryl Kho.

Attending the event were a few literary types including fellow Penguin Random House SEA published authors. A few clearly enjoyed themselves, even before the flush of Pinot showed on their cheeks. “My first face-to-face book launch in two years, and what a treat! Commentary by luminaries and the most luminous readings about humans and the environment by author Mallika, already a mistress of her craft at her debut,” said Audrey Chin, author of The Ash House.

Another author, Vicky Chong, relished being at the live event too (goodbye Zoom Doom due to Covid restrictions). “The book launch of She Never Looks Quite Back by Mallika Naguran was unique as there was a panel of esteemed academics like poet Kirpal Singh and writer Robert Yeo discussing not only the book but their relationship with the author. The informal conversation was insightful and delightful, and made for a wonderful evening spent with fellow book lovers.” Vicky is the author of Racket and Other Stories.

Daryl Kho, author of MIST BOUND: How to Glue Back Grandpa, wasted no time in sharing his delight in mingling with other authors on Insta. There he wrote: “Congrats Mallika @mallika_the_writer for a lovely book launch! Was a privilege to celebrate the birth of She Never Looks Quite Back with you and to hear the backstories behind the stories. Having been surrounded by strong women all my life (and outnumbered including in my home) I look forward to reading all about them in your pages.” 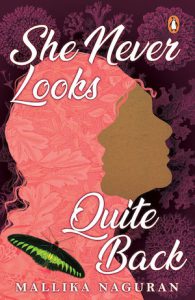 Gender-based impressions, strong opinions and roused emotions aside, Mallika’s book launch brought people together, physically, at a time where ‘social distancing’ has become a sick case of norm. What destiny lies ahead for us all? No one could have put it better than Asha Popatlal, communications consultant and former CNA broadcaster. “What stuck in my mind was that Mallika was a person writing about her observations of folks in different points of time i.e. our shared destiny. And perhaps at no other time in recent memory has it been more obvious and important to focus on what we share universally rather than what tears us apart.”

Mallika would like to thank those who attended the event, those who sent well wishes but could not be there, Kirpal Singh for being an amazing pillar of support, Robert Yeo and Lye Lin Heng for being incredible panelists, Anusha for being an ace videographer, Sarah & Aaron for keeping an eye on the books for sale. Wished you were there? Well, no sweat. Watch the recording here. And go on, get a copy of the book!

WHO ELSE ATTENDED THE BOOK LAUNCH? 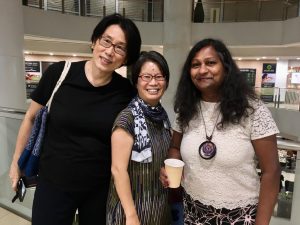 With Tina Sim and Jenni Ho-Huan 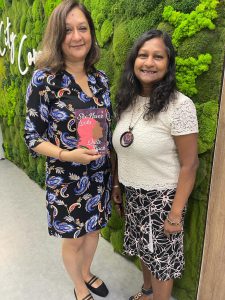 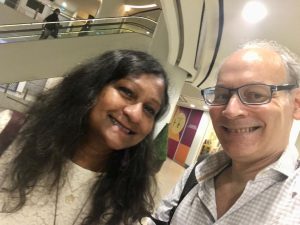 Ramayana: The Quest to Rescue Sita