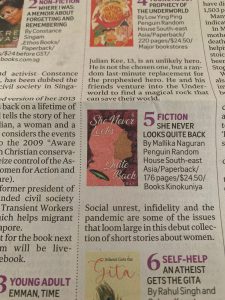 Whoopee, my book She Never Looks Quite Back caught the eye of The Sunday Times, Singapore’s leading English newspaper — the Sunday edition of The Straits Times  — that is read widely. This was published on Sunday (of course), the 13th of March 2022.

Pleased to see that my peers’ books were also featured: Low Ying Ping’s book for young adults titled Prophecy of the Underworld as well as Eva Wong Nava’s book The House of Little Sisters, also for young adults. Both of these books were published after mine, by the same publisher, Penguin Random House SEA.

The full page article can be seen below. 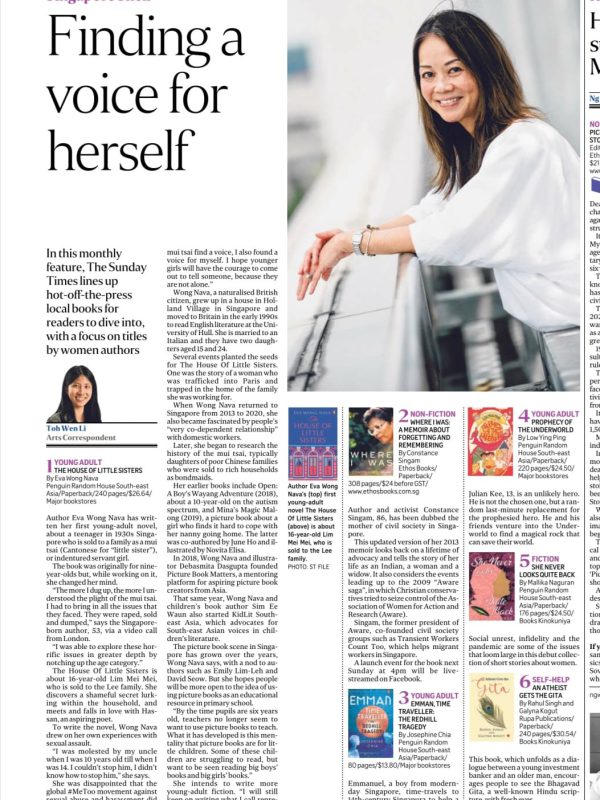 ABC Radio Breakfast Show in Hobart featured me at an unearthly hour on the 16th of March 2022. Ryk Goddard was more awake than I was as he interviewed me about my Pub to Park storytelling series, which I started in Tasmania as a way of sharing my stories from my book  to others. And that was at 5:30 am!!! Yup, I was as sleepy as a koala on a gum tree but managed to be somewhat awake enough to respond to his questions without going off track (or falling off the tree), hopefully.  What do you think? Here’s the interview transcription. 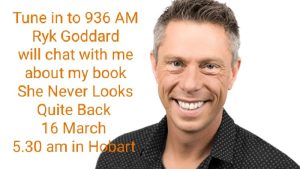 Ryk: There is an author residing in the hills of Fern Tree (Hobart) who has just published pretty extraordinary books and short stories. Malika Naguran seems to draw inspiration from all over the world and turn them into really powerful short stories but they’re all connected with one link, which is the resilience of women. I’m looking forward to this conversation actually. She Never Looks Quite Back. What a great title! What made you want to put these stories out there?

Mallika: Well, I’ve always wanted to communicate what I see that’s happening every day in different people’s lives, in different countries. People who have gone through extraordinary times through various circumstances and I wanted to put it in a way where people might appreciate it the most.

Ryk: Short stories are often a vehicle for an emerging writer, but you’ve been writing all your life, like in so many different forms. Why did you want to just get all these snapshots of lives? What links them together?

Mallika: To put it simply at say my prime motivation for writing is to show the truth. So, for instance, my short stories carry subtle messages of social justice, environmental conservation, displacement and climate change even.  And I feel that this short story mechanism is a very powerful tool.

Ryk: You write a lot of your stories from perspectives of really different women from really different cultures. How do you get inside those heads and voices and have you started? How do you balance that issue of appropriation and of authentically speaking in other people’s voices through imagination?

Ryk: And I think it’s like, it just remains such a challenge in fiction in terms of the creation of characters, people’s story, and their place. And one of your stories is set in Singapore. The Japanese Occupation as they reflect back in time, but also there’s a Tasmanian link about really an incredible person you met when you were selling your iPad. I love the story (“Elvis on my iPad”).

Mallika: Yeah. That’s really special. I was selling an iPad on GumTree, and this woman responded and when I met her she had Elvis all over… on her handbag, phone cover, in her diary and while she was trying to buy the iPad from me, she’s just telling me her story that she used to live in Arthur River and how her past is different, how her husband “fell by the knife”—a phrase that she used, which I captured in the story. And she consistently had this chirpy voice; her husband used to be a fisherman of crayfish. I thought wow. And it ended by her saying oh, great, Happy New Year, I’m going to need a coffee celebrate my new iPad and she just left… and this episode just struck me and I wrote a story about it in five days. It was like magic. And that was incredible. So, I tried to bring in the wilderness of the West Coast and contrasted it with the manicured lawns of Launceston.

Ryk: The Tasmanian environment is something that seems to really sit powerfully with you in the marine environment too. What’s your connection to the ocean?

Mallika: Well, I’ve been scuba diving and a bit of an environmental conservationist and I’ve done reef monitoring and even reef building in Indonesia, in Malaysia. I feel that animals have their place and marine animals are often misunderstood, so to speak. So, whales, dolphin feature in my stories in a most unusual way, sometimes to display a certain connection with a human form, you know, and I use that to communicate the struggle that goes on within the individual as well as to reflect the social or economic or environmental climate.

Ryk: Mallika Naguran, an author, has just published a book called She Never Looks Quite Back with Penguin, nonetheless, Random House. A collection of stories, different women, different ages different perspectives all over the world. And what’s really fascinating is the way that you’re presenting this with the “Pub to Park” storytelling, which is so cool. So, what’s this idea and where did that emerge from?

Mallika: Well, I needed to tell my story, and sometimes it’s really hard being a short story writer and to get people to buy the book to hear the different voices. Yeah, I am increasingly finding out that once you’re an author, your next step is to have to get people to read your stories.  I’d really love for people to read the stories and hear what’s happening out there in the world, so I thought, where should I read my story, and I thought, okay, in a pub because there’s a story in the book about a woman on a barstool getting increasingly drunk, and I got that motivation from a setting in Molly Malone’s, an Irish Pub in Singapore. And I thought, what could be a better setting then having the storytelling in the pub, and so I fixed a reading with a local pub for the Saturday. And as for parks, I thought, yeah, you know, maybe I could read my stories about nature. And, I think of taking them into the trails of kunanyi or some other mountain. I though… this is interesting… sounds interesting…  maybe I’ll do that. So, I’m going to get people to go for a walk with me. And as we walk, I will read from my stories, and maybe even from my poems.

Ryk: I think in this sort of world of wild and wellness, and this is an area that you’ve worked in to a certain extent, this is a beautiful combination of fiction and environment.

Mallika: Yeah. I think that we go into the forest, we get transported into another world, and a lot of stories can be told. And the use of fiction is a powerful tool. You know, for instance, when we talk about climate change, we don’t get persuaded too quickly by hard sciences sometimes. But when we talk about a person who is affected by climate change, because the forest was involved, the village because of a dam bursting, because the storm water overflowing—and that’s so topical today. You can see the person’s plight because of what they go through. So, fiction is a tool to really communicate every day issues in a highly compelling way. So that’s why I think fiction is something that people will appreciate.

Ryk: And you can get details of this where? Is that on your website, the best place to go—Mallika the writer?

Mallika: Yeah, I think people can go to my website MallikaTheWriter.XYZ. And I think the best thing is really to get a copy by ordering the book from the local bookstores because it will take six weeks, I am trying to get people to come to my reading. The dates are listed on my website. So that’s pretty easy.

Ryk: Lovely to meet you this morning.

Mallika: Likewise, and enjoy the stories!

Ryk:  I love them. They’re fantastic. You’ve heard Mallika Naguran here, and you can look up Pub to Park for those storytelling experiences.

Got a cute little mention in the events spread of The Hobart magazine in April 2022. Culture-loving and community-minded Hobartians typically snap up the free copy when it gets distributed to cafes and stores. And spill coffee over it, excited to see so many fun things taking place in this charming town.

My first nature reading at Fern Tree was featured, and it drew the attention of families and kids to the event, and we had fun. I read “Bird Watching” while we went for a walk and looked at trees, the overwhelming sprouting of mushrooms on the track in kunanyi. And the Springs Falls, of course. Thank you Stephanie Williams, editor of The Hobart, and team, for your support. 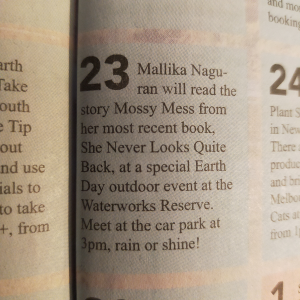 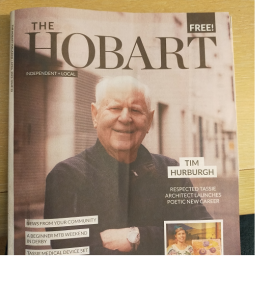 In September 2022, Tasmania Writers Centre or taswriters chatted with me about my writing experience and my stories. Thank you, Arianne James, for conducting this interview! Read the Q&A article here:

Get in touch for the next Pub to Park storytelling session! Or to hear from me.